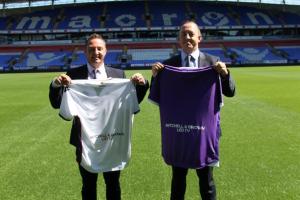 Mitchell & Brown LED TV to continue ‘back of shirt’ deal

Mitchell & Brown LED TV to continue ‘back of shirt’ deal

Local company, The TVD Group, will continue as Bolton Wanderers’ official ‘back of shirt’ sponsor throughout the forthcoming Bet Championship season with their Mitchell & Brown LED TV range, which carries a full seven-year warranty.Last season, the Bolton-based TV suppliers became the club’s first-ever back of shirt sponsor when they had their branding emblazoned across the back of the players’ home and away shirts.And to mark the release of the brand new home and away shirts, The TVD Group are offering the first 500 people who buy a brand new home shirt (in-store at Bolton Central only) the opportunity to have the Mitchell & Brown LED TV branding on the reverse of their shirts just like the players’ kit.

The brand new home kit will be available to buy in-store from Friday 28 July, but can be pre-ordered now by visiting www.bwfcdirect.co.uk

Wanderers’ Commercial Manager John Ashley said: “We are delighted that Mitchell & Brown LED TV have agreed to renew as the official ‘Back of Shirt’ sponsor.

“The partnership began well last season and our success in gaining promotion certainly helped springboard the Mitchell and Brown brand.”

Mat Brown of TVD & Mitchell and Brown commented: “After the club’s well deserved promotion to the Sky Bet Championship and the continued success of Mitchell and Brown, we are again honoured and extremely proud to continue as Bolton Wanderers’ official ‘Back of Shirt’ sponsor.

As both supporters and commercial partners of the Wanderers for over 40 years, it’s really exciting to see the club on the up both on and off the pitch.

“Once again we appreciate all the hard work everyone has done on both sides in putting this agreement in place.”

Dan added: “The Mitchell & Brown brand and range is very close to our hearts; the name originates from the late Jim Brown, our Dad, who was a Bolton Wanderers supporter all his life. ‘Mitchell’ being Dad’s mother’s maiden name and ‘Brown’ Dad’s surname.

The range comprises of LED TVs from 24” to 65”. Each TV in the range is packed with extensive features including T2 Freeview HD, Smart, 4K UHD, Freeview Play built in, which offers catch-up TV directly from the scroll-back TV guide and DVD combination screens. The models have been carefully selected to provide an exciting new, stylish and high-quality TV range, offering the latest technology and great designs at affordable prices.