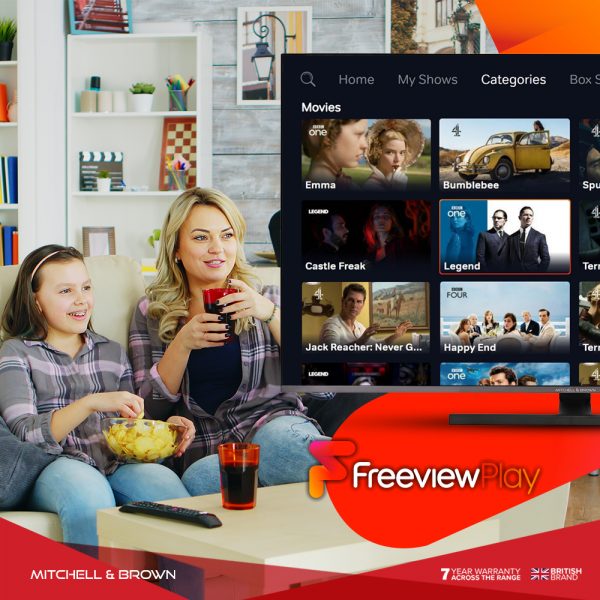 School’s out for summer! With the added expense of a summer holiday or days out with the kids, you might want to try and save the pennies this summer. From action-packed adventures to classic animations, there’s something for everyone to watch on your Mitchell and Brown Smart TV with Freeview Play. We’ve put together a breakdown of the best family-friendly films you can watch completely free on Freeview Play whenever you like.

A timeless classic by the creators of Toy Story and Finding Nemo. This animated comedy was released in 2006, but the heart felt story and lovable characters will keep the kids hooked from start to finish. Sully the ogre and Mike his green one-eyed companion scare children for a living, until a little girl follows them back to their world called Monstropolis. It’s then their job to get her home despite their fear of adult humans.

Peter Parker takes a trip to Europe but ends up in trouble! Spider-man is expected to step up and help prevent further disaster but starts doubting himself. This gripping film is the perfect choice for superhero fans, it’s a rollercoaster from the beginning.

An adaptation of the Louisa May Alcott novel with the same name, it’s a tale of four sisters and their mother during the 1800’s. The star-studded cast includes Emma Watson, Saoirse Ronan, Florence Pugh, Timothee Chalamet and Meryl Streep. This film will have you laughing one minute and sobbing the next!

The Queen’s Corgi, My5

Two months on from the Queen’s Platinum Jubilee, this animated comedy will be turning you into a royalist all over again! From the writers of Gnomeo and Juliet, this film follows one of the Queen’s beloved Corgis voiced by Jack Whitehall, as it escapes from the palace and tries to find its way home. Starring Julie Walters, Sheridan Smith, Matt Lucas and more, the quick-witted humour and interesting storyline makes this film a family favourite.

Sonic The Hedgehog, All 4

It’ll just be the adults in your house that remember the legendary Sonic the Hedgehog video game, but the kids can be educated all about Sonic with this modern-day adventure comedy. This movie adaptation shows speedy Sonic fleeing from an evil scientist. Voice overs by Ben Schwartz and Jim Carrey means there’s never a dull moment in this fast-paced feel-good film